Basscon hosted the Nocturnal stage Temple Noctem returning with the fan-favorite themed stage Wasteland gas mask theme, putting on a two-day, heavy-hitting hardstyle experience featuring Atmozfears himself, as well as Coone, LNY TNZ, Lady Faith and many more. Having been afforded the opportunity to cover Nocturnal Wonderland for Labor Day weekend, I was fortunate enough to be one of the first few members of the press to ever interview Atmozfears in America. This being because Tim, better known as Atmozfears, had yet to play a show in the United States prior to Nocturnal Wonderland 2016: Insomniac’s 21st installment of the Alice in Wonderland themed musical playground. 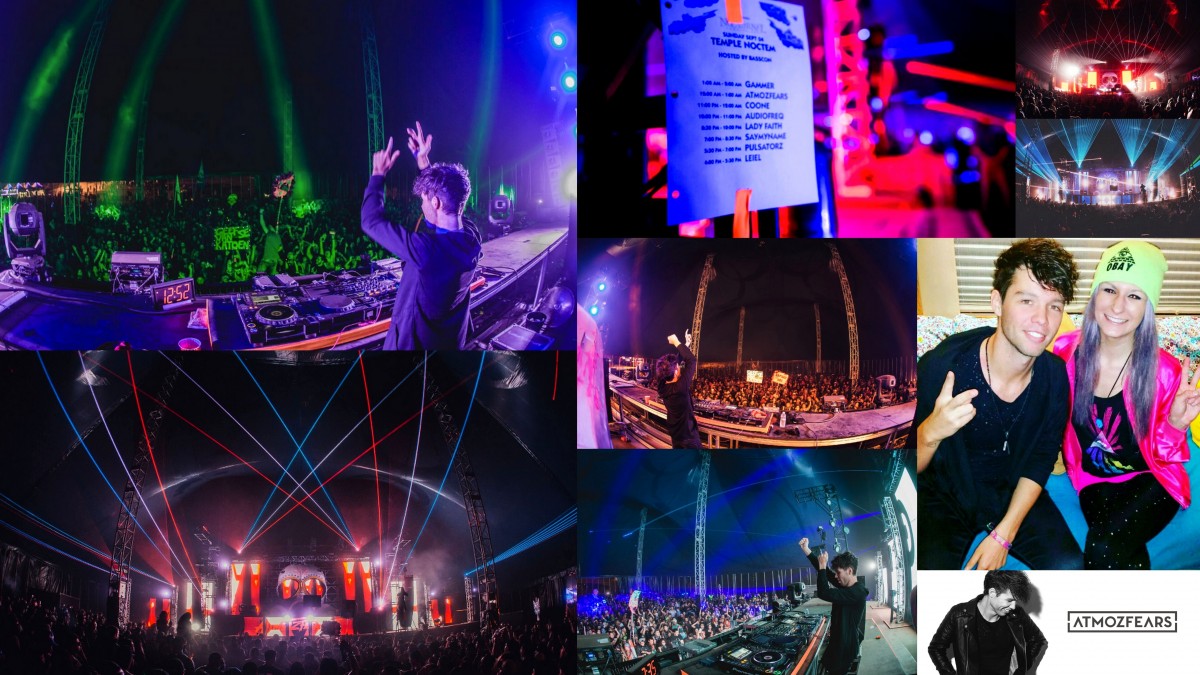 Atmozfears had left school to solely focus on his music at 18, when he moved to Los Angeles for a little under a year to learn audio engineering. Moving to Los Angeles to get started in the business is nothing new, but the way he accomplished this may be something you’ve never heard before. Tim accomplished this by helping out with a company working production for the filming of Batman Dark Knight Rises. This experience enabled him to get invaluable hands-on experience where he learned all about the ins-and-outs of audio engineering, and essentially allowed him to reach his goal of creating the QLIMAX anthem, which he accomplished in 2015 with “Equilibrium,” and now he is back in California for his American debut! Considering Atmozfears posted to social media after Nocturnal Wonderland, that his first show ever in America was an amazing experience, you can bet that Tim will be planning for a tour through the States in the future. Get ready hardstyle fans! [photo cred: Troy Acevedo with wearenightowls.com]

Relentless Beats writer Nicole Petriw: You collaborated with Carnage on producing your track, “Can You Feel It.” How was the experience working with a popular American producer like Carnage?

Atmozfears: I’ve only Skyped with him, we weren’t actually in the studio together so I didn’t get the studio experience, but he is a really cool guy. It was really fun to go out of my comfort zone, and do something with a North American artist.

Atmozfears: When I started out producing, I originally started out with the idea of one day making the QLIMAX anthem; this was one of my goals. So when they asked me to do it, it was a huge honor, As for the experience itself – it’s kind of a shame, when I played it, I kind of blacked out, and don’t remember what happened afterwards.

Relentless Beats: It was just that good!

Atmozfears: Yes, the experience playing it was just that good! Thankfully there are recordings of it on YouTube. Every time I watch it back I get shivers again.

Relentless Beats: That’s how you know it’s good – when it still gives you goosebumps every time!

Relentless Beats: Out of the past events: Decibel, Defqon, Tomorrowland – which show was the most special to you and why?

Atmozfears: I think DEFQON is the MECCA for hardstyle so if you are going to line those up, it is always going to be DEFQON because there is not one single thing missing from the hard dance scene at DEFQON.

Relentless Beats: How would you compare playing at DEFQON to playing at Tomorrowland since the crowds are so different?

Atmozfears: It’s funny because Tomorrowland you get more of the people who accidentally walk by, and they get stuck at that stage. It’s fun to play music there to people who don’t know anything about this style of music; it’s a fun experience.

Relentless Beats: You play at a diverse range of events with such a busy tour schedule. The weekend before Nocturnal, you played at the “I Am Hardwell” show in Germany, and now coming up soon in October, you will be playing the closing set at ADE: Amsterdam Dance Event. How differently do you plan on preparing for this set?

Atmozfears: It’s a hard one, because I am not used to being on a lineup where there are other types of genres playing; normally it’s just hardstyle, and now we have EDM, like with Knife Party for example, and it is such a big difference. But thank God it’s in Holland since I’m already familiar, and I know they will dig the hardstyle anyways, so I’m not too scared of that. It’s a fun experience to build up and plan for a night like this!

Relentless Beats: With all your upcoming shows, do you foresee an American in your future?

Atmozfears: I hope so! It depends how this crowd reacts.

Relentless Beats: This is your first Nocturnal Wonderland right?

Relentless Beats: In America, hardstyle seems to have just recently caught on and started growing in acceptance and popularity. If you do end up on your American tour, how do you plan on spreading the culture of hardstyle to lesser-acclimated dance music communities?

Atmozfears: I know that “trap” is big over here, so I try to blend it a bit; I like to give them something old, while showing them something new and then combine them together. Maybe even having some more known American artists on the tour, say like if I would be touring with Carnage, that would be a really good way to promote hardstyle.

Relentless Beats: Absolutely, since that’s what Carnage even had started out with was hardstyle, which is so crazy to think about now.

Relentless Beats: What artists do you look towards for inspiration?

Atmozfears: It’s a big list, but my top producers, there’s one in Holland and that’s Noisecontrollers. Then I have Noisia, Kill the Noise, Skrillex, and there’s also some guys on the Monstercat label that I really like. I’ve released tracks a couple of times through the Monstercat label as well.

Relentless Beats: What initially got you into the music scene; for instance, did you start out playing piano?

Atmozfears: Yeah, my parents forced me to take piano lessons when I was 5 or 6 and I continued that until I was 14, so I would have down the basics. They also had me in a boys choir, and that was a lot of fun. So all of that really helped me, and I think at 14, I stopped playing outside and stayed inside more when I discovered music programs, and that became my thing. I didn’t go to school anymore; my parents just said, “Hey, focus on your music and just leave school.”

Relentless Beats: What artists are on your bucket list to collaborate with?

Atmozfears: That’d be Kill the Noise and Noisia.