Tiësto turned 48 this week and the superstar international DJ celebrated in a major way. His actually birthday is on January 17th, but with a life as spectacular as Tiësto’s you party all week!

The festivities began on the 14th with a huge celebration at MGM Grand. Tiësto pulled up to the hotel in a red Aston Martin and was greeted by the UNLV marching band performed “Red Lights” in the lobby. A group of Tiësto girls danced around the band and huge statues of Tiësto’s logo with sparklers coming out of the top. It was a celebration fit for royalty and from here on out January 14th will be recognized as “Tiësto Day” in the city of Las Vegas. 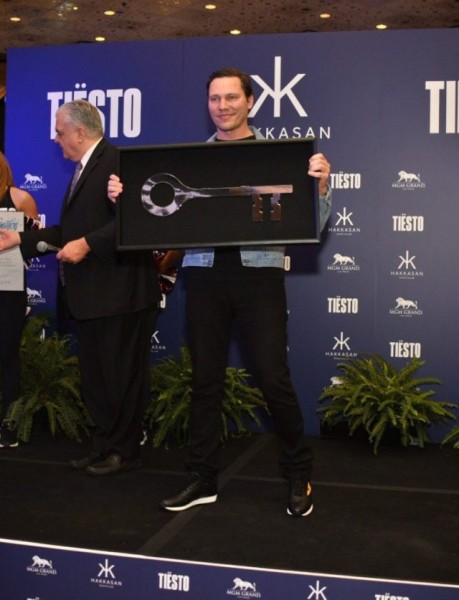 In addition to ‘Tiësto Day’, the county commissioner went one step further and gave him a key to the Las Vegas Strip!

“I am thrilled to present Tiësto with the Key to the Las Vegas Strip.. Tiësto has changed the face of the DJ world. Through his dedication and passion for his work, Tiësto continues to be an inspiration, not only to other DJ artists but to all Las Vegas performers.” said commissioner Sisolak.

There’s no one more deserving of this honor. Tiësto has made a huge impact on the city of Las Vegas and it’s economy. He’s held a residency at Hakkasan Nightclub since it opened in 2013 and recently extended his partnership with the club. A Town Called Paradise was released in 2014 and was largely inspired by his time DJing in Las Vegas.

Just the day before receiving a key to the strip, Tiësto released “On My Way”, so I guess you could say he’s had a busy birthday week! See what all the hype is about when Tiësto takes the stage at Phoenix Lights on April 8th. Get tickets here!