The Hideout stage was no secret at the first ever Goldrush Festival. Curated by RBDeep, the stage exposed the masses to international house and techno talent, from Claude VonStroke’s Dirtybird label to techno’s “Queen of Darkness,” Nicole Moudaber. Acclaimed DJ, producer, and label head, Jeremy Olander, visited us all the way from Stockholm, Sweden to brave the Wild West revelry of our inaugural Goldrush Festival. I sat down with him to discuss his hip-hop upbringing, his Vivrant label, and…movie scores? See for yourself! 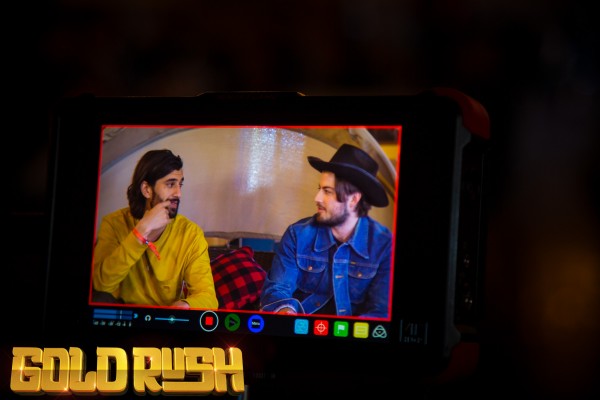 I’m here with Jeremy Olander, all the way from Stockholm, right?

So, we’re here at Goldrush. What do you think of the Wild West atmosphere?

Well, I just got here but seems to be pretty dope. I mean obviously, you have the right outfit (I was sporting my best cowboy getup) I’m gonna check it out afterward for sure.

Knowing that you grew up listening to a lot of hip-hop artists, what do you think playing alongside some of the hip-hop we have here at Goldrush?

I mean I’ve been going to a lot of hip-hop concerts when I was younger. I grew up on hip-hop. Obviously, it’s very different from DJing, but it’s fun to mix the two together. I get a lot of inspiration from there (hip-hop), so I can definitely see the synergies between them, at least for me you know? I can’t speak for everyone else. I like sampling hip-hop lyrics.

You stole the next questions right out of my mouth! What hip-hop have you sampled before?

Yeah, I’m more of an East Coast kind of guy.

Speaking of East Coast hip-hop, A Tribe Called Quest, MC Q-Tip, Vivrant, tell me a little more about that.

Well, when I was trying to come up with a good label name, it was not easy, man. You want it to be like *snap* really on-point, and I was so insecure about names, and then I had this old track called Vivrant which is obviously from Q-Tip’s ‘Vivrant Thing’. I don’t know, it’s just a cool name, it’s vibrant, music is vibrant, you know? That’s where I got it.

Let’s move onto your music. What spurred you to create your label Vivrant? Was there a void you saw that needed to be filled?

I mean, when I started producing, it was really hard for me to find a label that was good for my sound. Obviously, I worked with Eric Prydz before and his label was a great springboard for me. And then, I wanted to do something to be a home for other artists that are in the same kind of style that I am. I think now there are more people coming into that kind of sound, but when I started I didn’t have many options, so I want to be a home like that for other people producing that kind of sound.

You said “sound,” tell me more about that. When you hear music how do you know you want to sign it to Vivrant?

That’s a really hard question because when I started the label I didn’t even think that I needed a sound. I just wanted to have a label, and then I realized “shit – I need to figure out a ‘sound’ for the label”. It wasn’t easy and I think it’s gonna change every now and then, but at the moment it’s kinda progressive with techy drums, pretty deep, and that’s where we’re at now.

Today, you’re playing amongst Bart (Skils), you’ve got Nicole (Moudaber) out there, and I know you have your techno alias “Dhillon,” so can we expect a little bit of techno, tonight?

We’ll see, I mean I don’t like to plan my sets. We’ll see what the vibe is like. The sun is still out now, so I might go a little more melodic, but you never know.

Set the vibe for the deeper stuff later? When the sun sets with the dust, it looks really nice out there, so I think that will be cool.

We’re using the hashtag #CanYouDigIt this weekend, so let’s use our imagination and do a little crate-digging. I’m curious, what are some lesser-known tracks that were influential to your upbringing in dance music, that you think are essential? Like, “dance music fans need to know these tracks,” but don’t have much exposure?

Wow, that’s a tough question. Arrangement-wise, I listen to a lot of film scores, I think, especially for progressive music, a lot of film scores are very slowly-building. For me, John Williams is great at this. Hans Zimmer, obviously. I think listening to that can be very inspiring, especially for people who make progressive music. I would definitely listen to more film scores, because the dance music is there, all the big artists like Daft Punk and stuff like that, the obvious ones. But, you can really get some good ideas and feelings from film scores.

I’m curious, do you like Stranger Things? I know they have a cool score.

Last question, completely unrelated to music. On a scale of 1 to 10, how excited are you for the new Star Wars movie?

Yep! In the middle of the day, I’m gonna go see it like a bum!

We want to give huge thanks to Jeremy for chatting with us, and for the awesome set he threw down at Goldrush!