Young and ambitious, Moore Kismet is a multi-talented musical genius who has taken on the industry at full speed. At just 16 years old, Moore Kismet has already earned the title of youngest artist to play colossal events like EDC Las Vegas and Lollapalooza. It’s becoming quite clear that Kismet won’t be slowing down anytime soon!

I was so honored to be able to talk to them after their set at our very own Goldrush Music Festival last weekend! We talked about their journey this year, music industry culture, and how important it is to be unapologetically yourself. Check it out below: 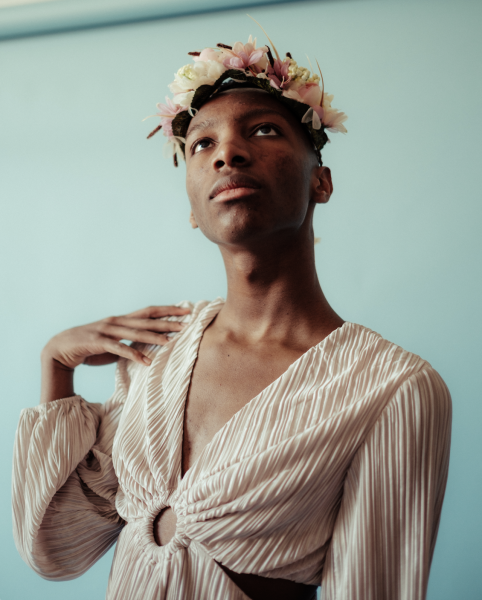 So, just last week you made history by becoming the youngest person to ever play Red Rocks! How did it feel knowing that when you first stepped on stage? How do you build on that momentum?

I honestly, I don’t know, whenever I play shows you know thoughts like that are running in the back of my mind and I’m just trying to fully process everything and make sure that I’m well aware of my surroundings and how well I’m doing. You know, making sure that every song transitions well into one another and that the crowd is as engaged as I am and so I think as far as keeping the momentum going I just wanna make sure that I can deliver as best as I possibly can on every tour stop so you know – that’s always been my goal. I’m just very, very excited to kind of see where things go from there!

You’ve talked about “the Moore Kismet sound” before, how would you describe that sound?

A fan actually came up with this, and I’ve never heard it as perfectly described as this, they called it “beautifully controlled chaos” and that’s kind of been my process as far as songwriting goes for the longest time. You know, I’ve never resonated with a statement more as far as my personal musical sound goes than “beautifully controlled chaos.”

I love that! You’re a DJ, producer, voice actor, visual artist, and character designer. How do you find a balance between all of your talents as well as school?

So typically, I try to make sure that I get whatever school work that I have done in school. If not, I take a little bit of time to finish that up, and then I just proportion points of time throughout the rest of the night to doing certain things. Like one night, I might be working on music, the next night I might be doing character designs for my project, or you know, another night I might be doing typography for a friend or cover art for my own stuff. Either way, it’s kind of like an unknown variable and I like to keep myself on my toes as far as everything that I do so that way I’m not totally in the dark or bored with what I’m doing. So, that’s just kind of what I’ve always stuck by.

I know your parents have been a big influence on your love for music. You even have a track with your mom, “Flair.” How was it like growing up in a musically oriented family?

It was very, very interesting because I never really knew at the time that music was something that I would end up doing, at least at this scale, freaking backstage having an interview with a Relentless Beats employee! But yeah, no, I think for me, growing up in a musically oriented family and kind of like becoming one with the skills that I’ve been blessed by with my creator, I’ve just kind of like slipped into it naturally and yeah, I get anxiety and depression, stress, nervousness, every now and again, but, at the end of the day music is something that drives me, A LOT. That’s just what I’ve stuck by for the longest time.

This has been such a huge year for you. Did you ever think your music would have this kind of an impact so quickly?

Hell no! Nope! Absolutely not!! In the great words of Chandler Bing, from the episode of Friends where he proposed to Monica, “I always thought that it mattered what I said and where I said it but at the end of the day all that matters is music.” I’m paraphrasing a bit—all that matters to me is you know my music, and my life, and my friends and so no, I never expected my music or what I say what I do in the Artisphere as a whole to have that much of an impact on people, especially other queer people like myself. You know, it’s been so amazing to hear other queer or other trans individuals reach out to me via Instagram or Twitter DMS and say “your music or your art has changed my life” because I never really think that what I do matters to anybody like that.

I’ve seen you talk about wanting to work with Rezz, Lil Nas X, and a ton of other heavy hitters. Do you have any smaller or underground artists that you feel like you could make an unexpected, yet brilliant collaboration with?

Oh absolutely! Let me see if I can name them all off by memory *laughs* Matt Barri, Cattle Fox, Nemesy, LM, Sixth Sense, Decay, Euphorian – we already have stuff in the works, but nothing out yet so hopefully we can make that happen soon. Dive to the Heart! OMG, I would fucking love to work with Dive to the Heart. I don’t know how they do it, but there’s this Laura Les remix that I play in my set that goes the fuck off every time that I play it. I would love to work with them. If I could find some way to reach out to them ’cause they’re nonexistent on social media outside of SoundCloud, I will shoot my fucking shot because it’s somebody else on the same level, so I have no worries! If it’s like someone like Griz or Zeds Dead, no I am going to have anxiety.

You’re living your truth with such beauty, grace, and confidence. What piece of advice would you give to fans, or even other artists, who are trying to do the same?

I would say to never be afraid to be unapologetically you, and what I mean by being unapologetically you is that if you feel the need to hide the best parts of yourself, you need to reevaluate that and you need to think about it. I get it, when people come out sometimes their parents aren’t as accepting or their friends or close ones aren’t as accepting of that, I should know because I’ve had experiences like that with other people in my life. But you know, having a strong support system, for me that’s my manager, my friends, my mom—OMG my mom is amazing! Mama Kismet is the absolute greatest person on this planet, no fucking doubt without it. Number two is Skrillex but number one is my mom. *Laughs* But yeah, no, having a strong support system behind you, people that support you being you, and never having to change yourself—that’s the biggest thing you could ever have in your life and I feel like a lot more people need to hear that. You know never be afraid to be you. That’s why I’m here, and that’s why I’m living my truth, and that’s why I’m doing a lot of things and helping open doors for a lot of people who might not have ever gotten that opportunity had no one said anything about it. So you know I’m just truly grateful to be in this position and just grateful that I get to share my art with the world, and I hope that someday other people who may feel the need to feel unsure or afraid about themselves and who they are can step into that spotlight and realize that they’re just as special as well.

You are truly redefining the entire industry right now. What type of change would you like to see the industry have in the next few years?

More people of color. More queer people. More people of underrepresented communities in positions of power at festivals, at promotion companies, at labels. You know I’m sick and tired of having to deal with the same white A&Rs at these dance labels, and don’t get me wrong, like they’re INCREDIBLE at their jobs but at the same time, I wanna talk to a Black person, at a label that is Black-owned, about my Black experiences. Other A&Rs, other cis A&Rs, will not understand the experiences that I have to go through, even if they are allies. So being able to talk about that with people who look like me or people who resonate within the same communities as me, that to me means there is a significant change in the industry where we’re being welcomed back into this space that we’ve created and that we’ve forged.

There’s no doubt, Moore Kismet is changing the industry! It was such a pleasure to chat with them—follow their socials to keep up with all that they’re doing!