Does the Freshly Announced Bonnaroo Line-up Beat Out Both Coachella and Governors Ball?

As we enter the new year, some of the most sought after festivals of the season have begun announcing their prestigious line-ups. Just a few weeks ago we were shown what Southern California’s biggest festival, Coachella, had to offer; and a few days following we were graced with the names of this years Governor’s Ball. There were many similarities in the line-ups as well as big differences that may attract one audience over the other.

With the Coachella line-up we will get to see artists like Guns N Roses, LCD Soundsystem, Calvin Harris, Ice Cube Sia, and many more. With Governors Ball you can expect to see exclusive performances from Kanye West, The Strokes, The Killers, Beck, Death Cab for Cutie, among others. However, both of these line-ups have proved divisive to fans of the festivals. Many have stated that they lack any sort of excitement; they seem very much like previous years; there is nothing that really truly stands out. Of course Coachella has the huge reunions of GNR and LCD, but the question remains… did anyone really ask for that? Yes and no. Governors Ball has some of the largest names in music and some that hardly ever tour anymore, but past that does it really have much to offer?

Cue Bonnaroo. The official 2016 lineup was announced on Tuesday, January 19th via Conan, and has the good of Coachella, the interesting of Governors Ball, and a whole lot of surprises that fans are going to eat up. 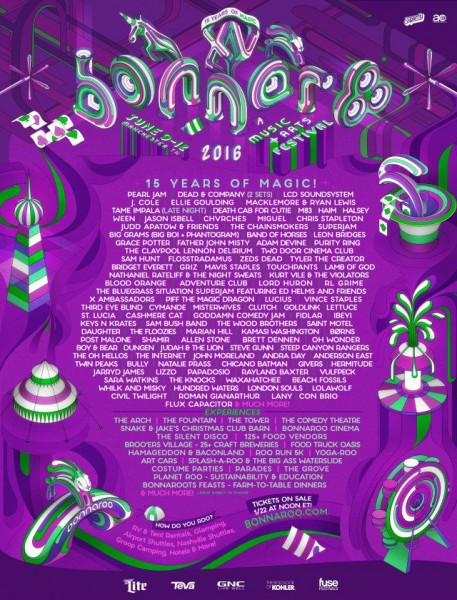 Headlining Tennessee’s largest mix of music is Pearl Jam, J. Cole, LCD Soundsystem, Ellie Goulding, Macklemore & Ryan Lewis, and Dead & Company. Take a look at that and really let the headliner diversity sink in. Grunge, Hip-Hop, Electro-Rock, Pop, Classic Rock. It’s all right there in these 6 artists at the top of the bill. This marks LCD Soundsystem’s 2nd headlining show after Coachella. In addition, if you were unaware, Dead & Company consists of the remaining members of The Grateful Dead accompanied by John Mayer, which will surely make for quite an interesting performance.

What do you think? Does Bonnaroo have Coachella and Governors Ball beat?