ODESZA Just Played Their Best Show Ever at Red Rocks

The show sold out within hours.

There were a few things that made this show special.

First, was the fact that the lineup was made up of strictly artists from ODESZA’s label Foreign Family Collective. Louis Futon opened, followed by Big Wild and RÜFÜS DU SOL. Needless to say, this show was something Foreign Family fans had been waiting for.

Second, although ODESZA performed at Red Rocks in 2015 with Chromeo, this was their first headlining show at the historic venue.

Let me again emphasize that this show was far from average, this was one that ODESZA had been hyping up since January, and for good reason. According to a review on Sweaty 320, ODESZA “seemed to know that this moment was truly special and they made sure to take their performance to the next level.”

Not only did ODESZA bring the energy, they took it to new heights with some insanely creative surprises. The duo featured the Colorado University Marching Band and the Colorado Symphony which worked to boost up ODESZA’s originals like no other.

Check out this fan-video of ODESZA and the CU Marching Band performing “Bloom.”

Although this electronic duo had certainly already made their mark in the industry, this show 100% reenforced the magnitude of their talent. Featuring local talent like college marching band students and symphony members made this show one few would ever forget.

ODESZA took a moment to thank their fans and openly stated this was the best show they had ever played. 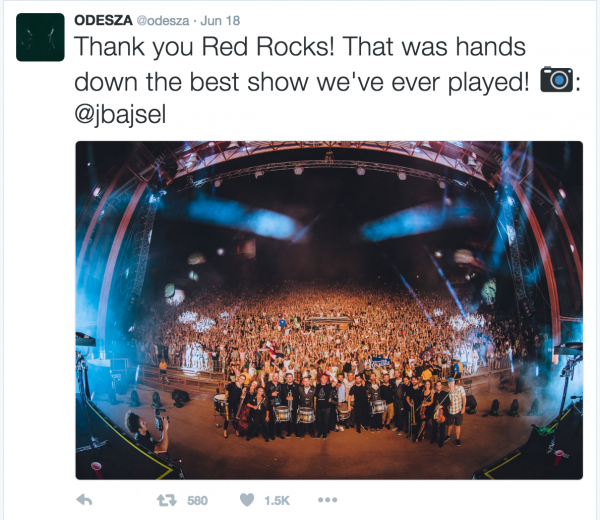 Certainly stay tuned for more from this massive electronic act, and be sure to take the opportunity to see them at a live show.

What’s next for ODESZA? They’ll be touring Europe for the next month and then will return to headline Vertex Festival August 5-7th.