Potentially one of the most stacked lineups of 2017, Firefly Music Festival just announced an overwhelming amount of heavy hitters scheduled to take its seven stages by storm. With headliners The Weeknd, Muse, Twenty One Pilots, Chance The Rapper and festival rarity Bob Dylan, the lineup features a very satisfying bunch of electronic acts to ensure enough BPMs at this Delaware bash. 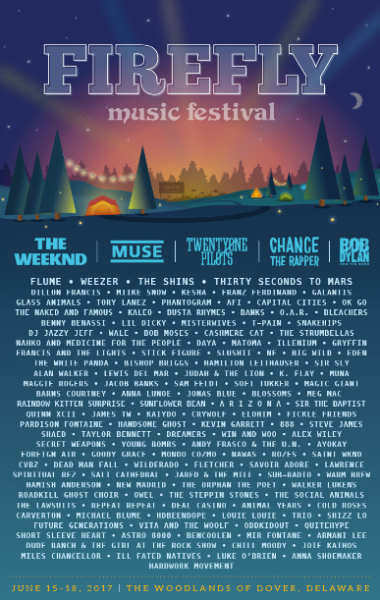 The lineup also includes familiar friends of the EDM world like Ke$ha, who collaborated with Zedd on “True Colors,” Daya, who sings The Chainsmokers’ “Don’t Let Me Down,” and Lil Dicky, who was on the roster for Mad Decent Block Party 2016.

With over 135 artists on the official line up, many up and coming producers and DJs are ready to prove to the masses what they’ve got. Phantogram, a duo who describes their sound as “dream pop electronica,” is best known for their remix of A-Trak’s “You Don’t Get Me High Anymore,” but has a lot more up their sleeve than that. Crywolf, best known for his remix of Flume’s “Never Be Like You,” and Shizz Lo, who is climbing up the trap totem pole, are also sets to add to your ‘must-see’ list.

The 6th annual Firefly will take over The Woodlands of Dover International Speedway June 15-18, and invites attendees to set up camp for the weekend amid the Delaware forests. Artists will perform across the seven stages; the Porch Stage, the Lawn Stage, the Backyard Stage, the Treehouse, the Coffee House, the Pavilion, and the Firefly Stage.

Grab your friends, book your flight, pitch your tent, and get ready for what could be the most epic festival of 2017!