RB Exclusive Interview: Building a Track with FuntCase and His Mum

Raised in a reserved town in South England, James, known to many as FuntCase, lived a quiet life attending an all boys school in Bournemouth. Interestingly enough, FuntCase’s mother, Carolyn, is also a producer. She toys with drum n’ bass and jungle music, and even held resident spots at massive clubs and events across the United Kingdom. 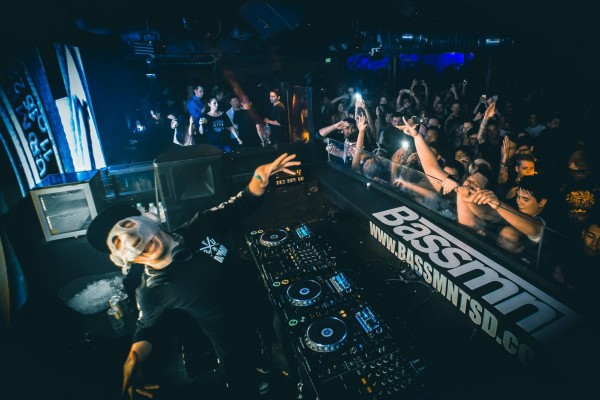 “I followed in her footsteps accidentally. I discovered music-making through Play Station. As I was messing around with music on there and it just sort of evolved and my mom mentioned you could do a lot more with the program she was using …”

Interesting for one to have a career producing music then for their son to continue in their footsteps. Even though his mother was well-known in the United Kingdom, FuntCase has had the opportunity to travel the world.

“My mom is jealous because she never got to leave the country with her music career. She is proud of me, but she is also jealous. She knows what I do and follows everything on Facebook, but she’s never seen one of my performances in the United States. I wanna bring her out to EDC or something, but she’s scared of flying. She needs to see one of these performances.”

Indeed she does. Imagine that, watching your son play music he created up on stage in front of thousands of loyal fans. Everyone in the crowd going ape-shit, running around, and banging their heads to the beat. A wild sight to see from such a perspective. 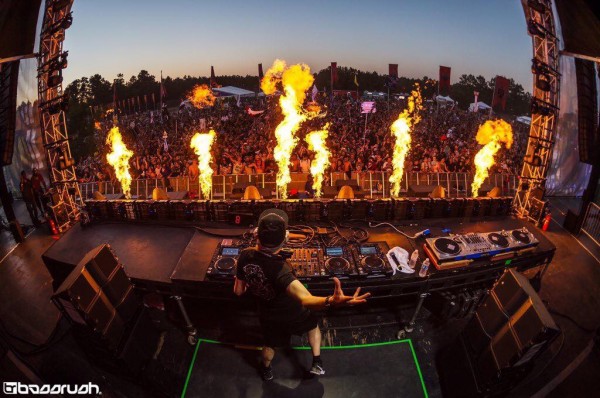 However, when it comes to creating the tracks, even though some producers can just sit down and start working, for Funt that just isn’t the Case.

“First, I think of a theme because the drop isn’t the most important part to me. Usually, in the process of making a track I do the drop first and work around it.The vibe and what you get from it that is what is most important. For example, think of Scary Monsters and Nice Sprites. That drop is huge, but the music around it is what makes it what it is. That’s a theme right there. That builds the entire track.”

Considering that, Funtcase claims the energy and aggression of a track is what’s most important. Without a doubt, the crowd he attracts definitely portrays the denomination of energy that is carried by his music.

“My tracks are made for clubs and festivals. I aim at crowds. In fact, I’ve seen many things in the crowds, injuries and stuff. It’s bad to say, but it’s cool seeing injuries because you’re like ‘damn that person is going hard.’ Or some guy just split his forehead and he’s like ‘fuck yeah.’ Shit like that ya know. I even saw a guy in a wheelchair being lifted up and passed around. That’s fucking crazy.”

But is FuntCase as barbaric off-stage as he is on?

“My music doesn’t speak for my personality. The only thing about my music that represents me is the energy. That’s all I have. I’m just super happy and FuntCase is the complete opposite. I’ll jump around, scream at people, and beat my chest, but I get off stage and give a timid ‘hello.’”

With that, trying to live the life of your DJ personality 24/7 can be tough. Being up on stage, one can construct any disposition they please. DJ personalities are definitely a thing, so it makes you wonder which DJs resemble their legitimate personalities during a performance.

“A lot of DJs will try to live out their DJ personalities so when people see me in public someone will come up to me and be in my face, then they realize I’m just James when I’m not on stage. Imagine being FuntCase all day. That sounds like the worst thing ever, not even joking.” 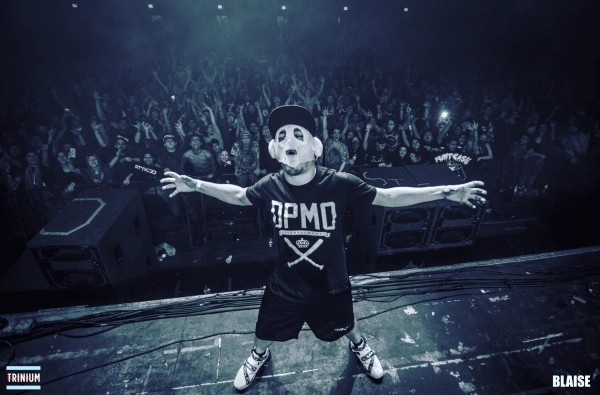 “FuntCase spawned from the metal days. I was always going ape shit on stage when I was in death metal bands, so I just translated that into dubstep.”

In fact, many producers originate from the metal scene. Getter and Borgore are just to name a few, and many fans of dubstep got their start in the metal scene as well. Coming from such a genre, everyone tends to understand one another when it comes to heavy electronic music.

Going on, working in the music scene has its ups and downs, but there is room for personal growth.

“Working in the electronic scene I have become more forward. I’ve always been a very shy person unless I know you, but now I’ve gained a more forward confidence when meeting people.”

All things considered, FuntCase defies the norms associated with his music. Starting out, he was just a young English lad who gained some inspiration for a steady career by playing video games. Also, with the help of music-making mother, was set up with the right equipment to get the ball rolling.

From metal to dubstep, working with certain is genres has allowed his fan base to grow at a fast pace. Certainly, he is known for his hefty tunes, but on the side, FuntCase makes all sorts of music.

“No artist makes just dubstep I can promise you that. I want to add more genres into my music, not to take away from the vibe but to set the scene. I make future bass, house, dubstep, everything, and I’m trying to incorporate some of that stuff into what I do. I’ve got such a loyal fan base but it’s really hard to keep one if you switch up all the time.”

On that note, FuntCase has some advice for active show-goers…