Kaivon was conjuring the love with us at Crush AZ this past weekend I caught up with him to talk rebirths and what it was it like to play his biggest show yet. 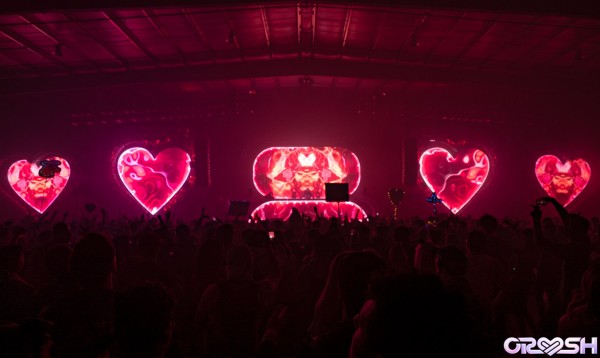 Welcome to Arizona, we are pumped to have you! So you’re fresh off the decks, how was it out there?

So amazing, definitely the best show I’ve ever played.

I saw on Facebook you called this one out as the “biggest show yet.” How’d you describe the energy and overall compared to other places you’d played?
Really unlike anything I’ve felt before. This is only my 5th show so it was by far the best. This was the best energy vibes with the loudest roar from the crowd which made it super fun. It was the best energy and more than I could have asked for from an audience.
I have to ask- for you being so in demand right now I am shocked at the number of shows you’ve played. Are you busy with school or other things right now that make it hard to come out and perform? I am sure the inquiries are flying in, so having just five shows to date seems small for your level of talent.
I only really recently started being open to doing shows since I’m so focused on just the music right now and getting it to where I have a solid body of work before hitting the tour scene. Now, I’m ready to hit shows and do as many festivals tour support spots as I can. I made this choice just about 7  months ago.
I have a high-level question about how you got where you are today.  In your artist bio, you say that, and I quote, “We all experience a point in our lives where we reevaluate everything we have done to that point and decide whether we continue this life, or we decide to be symbolically reborn into a new one.” Do you mind sharing your rebirth moment?
I was in college and I hit a breaking point in the first semester of my sophomore year. I was like ‘what am I doing I hate this’. I had this realization that I have one life and I don’t want to spend it working for someone in an office which felt like what I was about to do. I took a year leave of absence and went to Icon Collective (a school Slander, Jauz, and Kayzo have attended) and as soon I went there and started making music on my own time I just knew, this is what I am doing for the rest of my life. It’s me and I feel like people can relate to it.
Getting into you staying away from remixes for a certain span of time because you only wanted your true, vulnerable self to be conveyed to the world.. You ended that with your collab with Wolfe on the Nervo’s “Anywhere You Go”. This must have felt like an important decision. What lead you to remix this song and feeling ready to make it public?
Yeah, you’re right, that’s kind of the outlier because I only did originals and that one remix in the first 10 songs I made. So that came up because I was doing a remix contest for Monstercat and I loved the vocal from the song and Wolfe was and still my only collab. I chose him because I had heard his music before and I was really inspired by it. For some reason when I heard this song I immediately thought of him and I wanted to hear his input because I looked up to him and thought he could add to it.
A lot of people told me to stay away from collabs at the time but I just loved the song so much and knew it would work. Now it’s the song I open all my sets with.
In the mere 2 years you’ve been putting out music you’ve made leaps and bounds that exceed the average timeline for a producer. From playing alongside some of the biggest names like Valentino Khan, providing an official remix for Alison Wonderland to putting out your own merch, it’s crazy how much you’ve accomplished. If you had to choose, what’s been something that likes the #1 moment of your career so far?
That’s a good question. I think it comes down to the fact that for the past three years I’ve been so focused on making music I kind of forgot the feeling I felt at a show or at my first festival. That’s the whole reason why I got into this and now I’m finally starting to feel that feeling again that the shows. The highlight so far has been the show in Philadelphia at Jinx. I mean really all the shows have given me that feeling.
To wrap this up I have one more for ya! For all our theme festivals I like to end things on a fun note, and since we’re here at Crush and love is what has brought us all together, can you tell me and your fans some things you are loving on right now? It can be as obvious as another artist or as random as a meme.
All I do it make music and watch Netflix.
Fair, but on Netflix…tell me more.
I’ll give you all time favorites and then current. So for all time it’s Lost and Breaking Bad. Currently, I’m all over the place. Oh and Kobe. I love the Lakers. It’s not too popular in the music scene so I’m always looking to talk sports when I can. I played basketball till I was 18 and then I went to Coachella and heard EDM for the first time. That’s when I discovered Flume and Skrillex and I was like, “this is for me” and here we are.
Connect with Kaivon: Facebook | Twitter | Soundcloud