When it comes to sultry, sexy house, nobody does it quite like SOHMI. The Korean-American DJ, producer, and vocalist has risen to prominence over the last few years, leading to the launch of her own record label, Permission.

With a brand new track, “Get To You,” out today, and a headlining tour underway, SOHMI continues to be a force within the house and techno realm. We had the opportunity to sit down with SOHMI after her set last weekend at Body Language. Listen to “Get To You” now and check out the interview below!

We’re so happy you were able to join us at our first ever Body Language Festival! Your sound is a perfect fit for the vibes here this weekend. How would you best describe your style?

Thank you! I feel like the best way to describe it is sort of a blend of minimal house, techno, and tech house—all three. I tend to gravitate toward sounds that are a little bit deeper and a little funky, and I love things that are kind of hypnotic and make you feel sexy. I think that’s kind of my sound! And it doesn’t really matter about the genre, it’s more about the feeling of that dark, bouncy, sexy, kind of sound… with like a touch of drama and emotion.

I think you summed that up perfectly! I know you have some classical music training from an early age. How do you feel that’s played a part in your production?

I feel that’s it probably very subconscious at this point, in terms of like classical music background training and how that informs my music production. It’s sort of the foundation of how I approach melody writing and chord progressions, and stuff like that, you know? I guess there are just certain chord progressions and melodies that I gravitate toward and it’s not like I’m consciously thinking from a music theory perspective, like “oh ok, this chord after this,” it’s just what sounds right to me. I feel like I’ve learned that from all these classical pieces that I studied growing up, you know Mozart and Beethoven, and stuff like that. It’s not like my music SOUNDS like classical music, but I think there’s a musicality to it that’s informed by my classical music background.

I love when producers use their own vocals in their music. Do you feel more comfortable as a vocalist or a producer?

It depends on the day, *laughs* but I do think I feel more comfortable as a vocalist mainly because I’ve been singing for so much longer. I started singing when I was, according to my mom, like one or two. I don’t remember that obviously. She literally said, “I think you started humming before you knew words – you were just babbling melodies.” I sang all throughout elementary, middle, high school, and college. I did choir, musical theater, and in college I even did collegiate a cappella. *laughs* I know, SUPER cool. Like the movie Pitch Perfect, no joke, that was my college life. When I watch that movie I’m like “oh my god how do they know?!” So yeah, I’ve just been doing that a lot longer than producing. I started producing I would say like three or four years ago now, so when you compare the length of time it’s just so much longer. 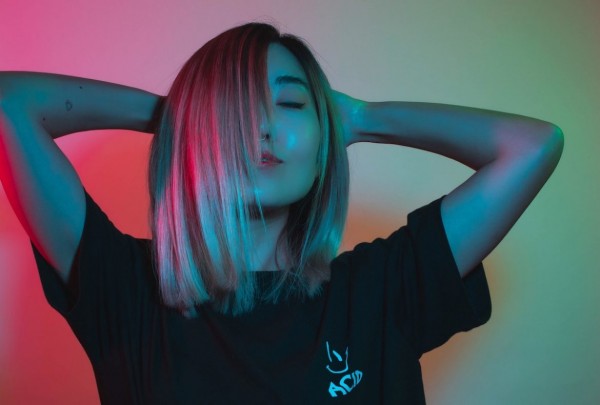 I know you just started your Bring Your Feelings tour. Are there any stops you’re particularly excited about?

That’s so funny cause I was wondering if people were going to think that is the official name of the tour. But it’s really just like a tagline. To bring it back to your first question, “how would you describe your sound,” I like music that makes you feel things, you know, so I threw that on as a tagline, like if you’re gonna come to any of my shows, make sure you come and bring your feelings; don’t be shy, be prepared to feel things. 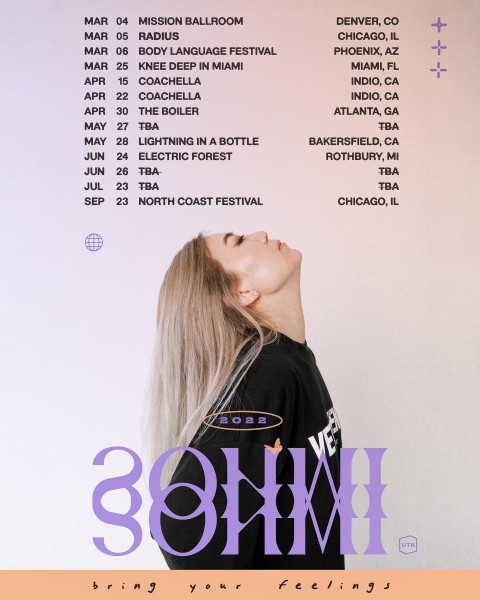 Do you find it hard to balance your personal life with an active tour schedule?

That’s a great question. I would say I actually find it hard sometimes to balance my personal life with just my music life, even if I’m not touring, because it’s sort of a constant grind. This is the kind of job where there’s no office hours, right? And it never really ends, so at any given time, and I’m sure lots of other artists can relate to this, there’s always something to do and there’s no clocking in or out. Like if you’re not touring, than you better be in the studio working on music and if you don’t feel inspired that day to work on music, you better be doing something to grow your social media following, better be making TikToks, there’s so many things and it never shuts off.

I’m also very lucky in that a lot of the people that are close to me in my life, and my partner, we work in the same industry, so not only do they get it – they get what I’m doing, they get the time commitment – but they’re in it too, they’re in the trenches with me. So I guess my personal life and work life are actually very intertwined, which can be good but also not good sometimes because you almost have no escape from it, but it’s good in the sense that the people that I want to be around I get to be around while I work.

You recently launched your own label, Permission. I love the idea behind it, that you are giving yourself full freedom to do what you want with it. Are there any new talents we should be looking out for?

So people have been asking me this question in terms of if I’ve been signing demos from other artists and to be honest I feel like the label’s not quite at that phase yet. I’ve only had one release out so far on the label, which was my track ‘Time” last year, so I think I’d just like to focus for now on putting out my own releases and just making sure that I establish a clear vision for the sound and the aesthetic and the vibe and all that before I try to branch out and involve other people in it. I want to make sure it has its own strong identity and foundation first.

It seems like you’ve grown exponentially in the past few years as an artist. What are your goals for the upcoming year?

Right now I’m just very determined and focused on music writing. I feel incredibly fortunate and lucky for all the opportunities that I’ve been able to have as an artist the last few years and you’re right, it’s felt very, very fast. I feel–especially compared to the body of music I have out, which isn’t a massive catalogue yet–like I’ve been so lucky to play a lot of really incredible shows. But I feel like I still have a lot of proving to do on the music side of things. So yeah, this year, I’m just really focused on writing great music and continuing to develop my sound. I don’t even really worry about the shows because I know that the shows will come, and the fans will come when you have the amazing music. So really my goal is to write as much music as possible and put out more of it.

On that note, is there anyone you’d love to collaborate with, and/or festivals you’ve been wanting to play?

There’s so many people. Where do I start? There’s tons of house and techno artists I want to collaborate with but then there’s like pop artists too. Let’s talk about those because they’re so fun to just dream about! Like Billie Eilish? I mean her vocals on like a minimal techno track would just be so cool. They’re almost meant to go together because her voice is so sultry and a little sad and moody, so imagine that on just a driving minimal techno track. And then Miguel, but Diplo beat me to that. *laughs* He just put out a collaboration track with Miguel that is SO good and I’m like “ugh I knew it, I knew Miguel would be so good on a house track” but no one’s done Miguel and techno so… Miguel and Billie if you’re reading this…

Connect with SOHMI on socials to stay up to date on new music, tour stops, and more!