WANT TO SELL TICKETS FOR PRIZES?

Book a room with one of our exclusive Decadence AZ partners and save:

Want to work with Decadence Arizona? Apply to be a vendor or staff member!

Known for spreading his aggressive Jersey club sound into electronic music, its no wonder DJ 4B is seen on major festivals like EDC, Mad Decent Block Party, Nocturnal Wonderland and Life is Beautiful to name a few... With massive releases on Mad Decent & Dim Mak, … Read More

Get to know NY based Codes’, DJ/Producer, on Slow Roast Records. His ingenious sample manipulation has developed into a non-classifiable style all his own. Laced with big ass kick drums and a tight low end Codes keeps bodies moving in the club. Whether it be … Read More

EPB (Electric Polar Bears) were born out of the love for throwing an engaging party, whether with his brother or solo, both polar bears know how to get the igloo a rocking. From their premier on Groove Cruise LA 2017, US debut at Time Nightclub, … Read More

They say that fortune favours the brave. For Eric Prydz, a bold musical agenda and an unrivalled ability to combine commercial success (3 x Top 2 UK hit singles) with underground notoriety (fastest selling release ever on cult download store Beatport), has allowed him to … Read More

All round girl-boss/bad bitch GG Magree is in the thick of an impressive twelve months. Setting the bar for 2017 high, GG has progressed from being Australia's girl next door -- grillz and all -- to one of the most exciting female talents to emerge … Read More

With his debut single “Heading Home” featuring Josef Salvat, Gryffin introduced the world to his magnetic take on electronic music: infinitely melodic, immaculately composed, massive in emotion. In the three years since that track shot to #1 on Spotify’s US and Global Viral charts, the … Read More

When Moon Boots hits the booth, he’s got one mission: to give you the best night of your life. Whether playing at iconic clubs like Chicago’sSmart Bar — where he cut his teeth watching legends like FrankieKnuckles and Derrick Carter — or the world’s biggest … Read More

Growing up in a log cabin in rural Vermont, Morgan Page began composing electronic-oriented music at the age of 12. By 15, his work appeared on local college radio and commercial stations in his hometown of Burlington and began to spread to other cities. Towards … Read More

NGHTMRE's ascent to the upper echelons of dance music stardom has been nothing short of dream-like. His meticulous production and pulsating performances have cemented him as both a festival mainstay and dance music tastemaker. His collaborations with Zeds Dead, Dillon Francis, Flux Pavilion and SLANDER … Read More

Nurture is the act of tending something frail into blossom; of patiently caring for something so it may grow. No wonder acclaimed producer/songwriter Porter Robinson turned to this word for the title of his second album. A joyous, brave explosion of electronic ideas, introspection and … Read More

San Holo is the future beats to trap connoisseur that might be dubbed the fastest growing current electronic talent. Making his debut in late 2014 with the COSMOS EP on Heroic, he garnered the attention of all the major tastemakers. This resulted in a friendship with … Read More

Widely considered as modern-day kings of the underground, Mancunian duo Solardo (James Eliot & Mark Richards, aka MRK1) continue to blitz all before them, amassing widespread plaudits for their role as not just hugely popular DJs, but also label owners, and innovative forward-thinking producers. With the … Read More

Hailing from Atlanta and ready to take over the world: it’s Treasure Fingers Treasure Fingers is Audio Viagra (NY Post) Treasure Fingers, the DJ and producer born Ashley Jones has been making it rain in the disco with innovative remixes and original tracks. Jones is far from a … Read More 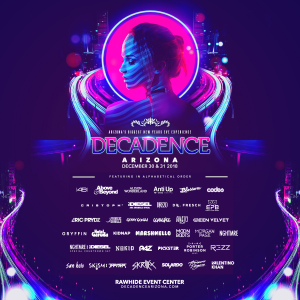