Black. Tiger. Sex. Machine. As if the name wasn’t a jam packed force of in your face power with that name alone, these guys are doing some major things with their incredible talent backing them.

If you haven’t witnessed this animal house of a machine that makes this trio what they are, go ahead and realize the gaping hole in your life… Or fix this problem and just “follow the lights” all the way to their set, at Phoenix Lights that is on April 2-3, 2016. Yes, dry your tears; that is the phenomenal solution to the above stated problem.

Here at Relentless Beats, I owe these three busy guys a huge thank you as they took a quick breather from their crazy tour and got us this one-on-one interview. I know, as if you weren’t already drooling on your keyboard with the Phoenix Lights announcements… Well I’d step away first to give your keyboard at least a momentary break from completely drowning before diving into the world of BTSM.

You guys have had/have some pretty intense tour dates going on… How has that been and what do each of you and/or as a group do to take care of yourselves and be able to deliver your best as artists for every show?

“The tour has been intense and non-stop; we’re finishing up our 10th week right now. In all, we’ve played around 35 shows so far. Life on tour and away from home can be intense, but everyone is more or less a fitness freak, and we’ve been working out a lot. This helps us keep our energy up and stay razor-sharp with all the late nights and non- stop transportation.”

Your live act is one to be known, and one of the best around. You guys have an amazing set up, yet never any one show is the same. What influences and makes this possible?

“We come from a DJ background but have always wanted to give fans a more immersive performance. Our live act, as we’ve built it, is meant to be very versatile, and we’re super proud to have a malleable and adaptable show that can change every day. Obviously, some of the live routines can’t be changed overnight, but we’re able to modify some aspects from show to show. This was really important for us, because some fans travel between shows over weekend to see us in different cities. We want to make sure that there”s always something different for them and we’re working around the clock for that to be a reality.” 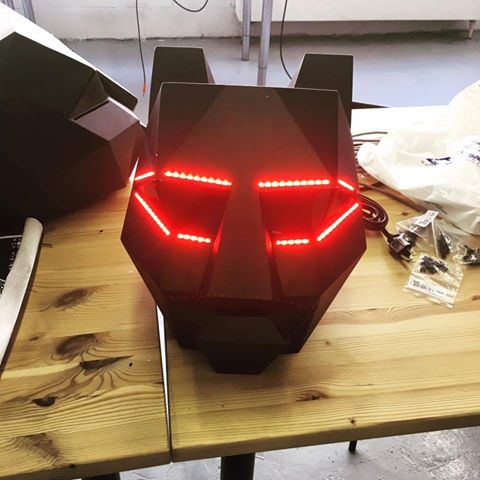 You guys have these phenomenal looking helmets that we’ve all come to know your group by when performing! Whose idea was it/was it any one person’s specific idea and what made you all want that to be a part of your image?

“We always had ideas of doing weird stuff, even before we chose the BTSM name. The helmet idea has to be attributed to Julien, who was just throwing ideas at Gab (the helmet designer) when they met at a party; Julien was interested by Gab’s industrial design studies. After a few drinks, the decision was made that night and Gab was polishing off the final products 8 weeks later.”

Even though your helmets are a part of BTSM’s image and shows, we know you don’t particularly try to hide your identities! Going along with that, are there other projects you guys individually have going on that you could tell us about and your fans could look into?

“No, we’re only sticking to BTSM. Kannibalen Records keeps us immersed daily and fully occupies our minds. Helmets are awesome, but we’re happy to take them off after every show to meet fans and to create that direct connection. If fans want to discover more, look up our entire Kannibalen roster: there is so much diversity and great producers and we’re blessed to have them on board with us.”

Congratulations also, to all of you, for the recent release of your new album Welcome To Our Church! If there was one thing you guys really focused on in this album, what would you say that was?

“The real focus was the album, so I guess the answer was that we decided to go for it, do what wanted and release it as we wanted. We’re really happy with the final product and with how it’s been received. There was no compromise or attempts to make it fit under a label–hence the title Welcome To Our Church. It’s that and nothing else.”

Personally, even from the first listen of this new album, it is phenomenal to hear that dark electronic sound that makes BTSM, BTSM. Yet, you guys are still able to diversify the types of tracks we hear on this album. Where do you all pull from for inspiration to be able to do this?

“We have a whole range of different musical backgrounds as club DJs, violinists and rock enthusiasts. The distorted bassline is the common ground, but not the only staple. You can definitely grasp the sci-fi orchestral influences on our album and some of our personal preferences like hiphop (on the song Crazies) and dancehall (on the song Survivor).”

What would you say your favorite part was about making this album for each of you?

“My favorite part was the deep and intense mixing of the full album, a task I undertook head on. I made it my mission to make the album as perfect as it could and I’m thrilled with the result.”

So, there you go, a whole new To-Do list provided to you via this article if you hadn’t gotten on it already. Listen to Welcome To Our Church and every track on it inside out, buy your Phoenix Lights ticket – seriously guys, those little gifts called Tax Returns happen for a reason, right? – and get your booty over to their set come show time.