Iman Marouf, better known by his stage name BlackGummy, is an American DJ and producer based in Los Angeles, California. He is best known for his dark focused industrial/techno fused productions along with his enigmatic black bear shaped idol. The Deadmau5 protege has already performed at festivals like Electric Daisy Carnival, Electric Zoo, Electric Forest, and Escape Halloween. He recently dropped the final EP of a 3-part series and he’s taking the production on the road. Next stop: Phoenix. 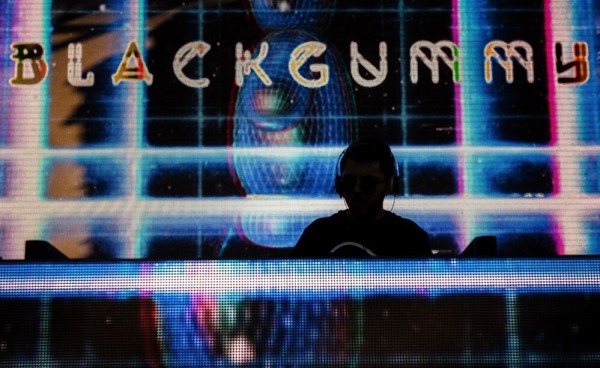 You’re about to embark on the Mesophase Tour. What are you looking forward to most from this upcoming tour?

I’m really looking forward to playing out the new tunes I’ve been working on since most of it has only been played in the studio. I’m also really happy to have friends like Attlas, Electrocado, Monstergetdown, Notaker, and Rinzen join me on this tour. It’s always fun playing with guys from mau5trap.

You’ve enlisted some killer support for this tour. How did you choose who to bring on the road with you?

I’ve played shows with all these guys before and have seen how good everyone is. We’re all also good friends who support and like each other’s music too so there wasn’t much of a choice that had to be made there. More of a “when are we making this happen” kind of thing.

Tell us a little bit about the Monolith EP. I know it tells a pretty impactful story that ties into your previous EPs, Singularity, and Impactor.

Monolith explored the time of humans. A lot of inspiration was pulled from the start of human civilization, and about the value that humans place on symbols. Singularity explored the point that artificial intelligence surpasses human intelligence (and humanity’s relationship with technology), and Impactor explored Earth’s long and complex relationship with all forms of life (human and otherwise), and specifically, the event that led to the extinction of Dinosaurs which eventually created an environment humans could thrive in.

Now that this 3-part journey has come to a close, what are you working on next?

There are a few surprises in the works that I can’t talk about yet but will be announced in the next few months.

We can’t wait to have you in Phoenix. What might fans expect from you during your set?

Fans can expect to hear lots of dark basses and to go through a deep musical journey that explores the world of techno, electro and progressive. I try to have a wide variety of these styles. Often techno and electro don’t go together, and the fans don’t necessarily like the other. But I try to weave them into each other in a way that opens people’s minds up to like both styles, instead of just one.